Plastic Pollution in the Ocean:

Something that I hear a lot whenever the topic of the environment, climate change and plastic pollution comes up is that “one person can't make a difference” and “it's not our problem”. Well, both statements are wrong. You may not see the impact you make when you pick up that piece of rubbish or when you turn lights off and turn the tap off, but it makes a difference.

Everyday approximately 8 million pieces of plastic pollution finds its way to the ocean. This leads to plastic killing more than 1.1 million seabirds and animals every year. Picking up rubbish and recycle it properly can help reduce this even if it is just one plastic bottle, you could stop it from choking and killing an animal either on land or in the sea.

And it is not just animals that are affected my plastic in the ocean either. In case you are not aware, most plastics in the ocean break up into very small particles which are called microplastics. They can come from many health and beaty products that I'm sure you have at home. Microplastics can be found in every form of water we have, including tap water as recent studies have found that 83% of metropolitan tap water contained forms of plastic pollution. Microplastics have even been found in the human’s digestive system which can be air born, come from foods or water supplies, especially bottled water. Therefore, we strongly encourage people to use refillable water bottles instead of plastic bottles. Microplastics can also find their way into us through foods. This could be from food packaging but mainly from the meat we consume, especially sea food. Sea animals live in the ocean and with plastic covering the ocean floor, animals end up consuming it. So, when we eat the fish and sea animals, we get the microplastics too. Many people don’t realise the severity of this. Microplastics can contain some potentially harmful chemicals which is not good when we end up consuming so much.

But not all plastic in the ocean is microplastics. The most durable plastics can take over 450 years to biodegrade. Sea life can end up mistaking these for food and will end up trying to eat it and consequently choke on it. The fishing industry contributes to the problem too. Most fishing nets are made of nylon which does not decompose. This means that sea animals continue to get caught in lost fishing nets for years and end up being injured or killed due to fishing net pollution. Bycatch is another serious problem where unwanted marine animals are caught when fishing for specific fish leading to so many needless deaths of sea animals.

We need to do our part to stop plastic pollution in the oceans. It is important that you do your own research and find other ways to help. 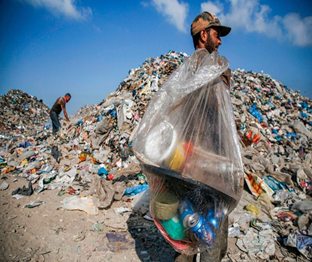 Every year 8,000,000 tons of plastic enters the ocean damaging and diseasing the marine environment. The reason for this is because single use plastic gets discarded, and they fragment, but they never really go away. This harms many animals that live, visit or even fly near the water. It kills about 1,000,000 animals per year! If we continue to pollute in this way the prediction is that in 2050 there will be more plastic in the ocean than fish.

At this point removing all the plastic in the ocean is impossible, but because shops for example, have decided to use re-useable plastic or reduce plastic use, the amount added will get less.

The plastics life cycle is something that we don’t see happen all in one place. It goes through a process of: Transport, Refining, production, Distribution, Consumption and Disposal.

Plastic is made from fossil fuels, like oil or fracked natural gas. Then it's made into plastic, which creates a lot of pollution, that often affects marginalized communities nearby.

We have gotten better at using less oil for our transport, but we are not so good at addressing the oil which makes plastic, so the industries that make plastic. 32% of packaging goes on the ground. 40% goes to landfill and plastic piles up for future generations to deal with. 14% is incinerated, this is a nasty business producing toxic smoke. Then there is recycling which it's not what many people think it is. Only 14% of plastic packaging gets recycled! Only 2% is effectively recycled to something as useful as before.

So what are we meant to do?

We can try to reduce our use of single use plastic, we need to recycle effectively, reuse, repair or compost it. We can start by not buying water in a plastic bottle.

A glacier. A temperature. A death. Caitlin, Year 13

A glacier. A temperature. A death.

People often tell me that caring for glaciers will not help me. It is a useless skill, it’s too specialist and is just out of reach. But someone has to care, because if no one else will speak up, who is the voice for our ice giants and our environment? It is not simply a body of ice, it is not simply a shifting mass creating features in the landscape for a future generation to learn. Glaciers are an income, a livelihood, a water source, an identity. It is not “just ice” this is the difference between surviving and dying.

Roughly 2 billion people in the Himalayas rely on the water from glacial rivers to survive. Bangladesh and many pacific islands lie at sea level, a small rise in sea level could threaten to kill billions. Not millions.

But we can still change, we have time to reverse this. We have time to show our ability to adapt, innovate and solve the biggest problem to have ever faced humanity. It is not down to our governments to set out climate targets, financial incentives or tell us how to change. We as individuals must make that choice. We are, after all, the most intelligent species on earth.

A vegan lifestyle has a range of benefits, most noticeably for the environment. We’ve seen the shocking impacts of climate change, and how communities all over the world are experiencing the harsh effects of global temperature rising. Often, we can feel helpless in the fight against climate change. However, something as simple as having a vegan lifestyle, or eating less animal-based products can have huge, positive impacts on the environment. Animals are bred as livestock for primarily use in food, releasing huge amounts of greenhouse gases like methane into the atmosphere. By even just having one vegan meal a week, you can save approximately 40lbs of grain, 1100 gallons of water, 30 square ft of forest and one animal.

So, the Eco-Committee organised a Great Vegan Bake-off, and the contestants did not disappoint! Year 7 – 9 rolled up their sleeves and showed their baking skills, producing excellent and delicious vegan bakes. This included chocolate cakes, vanilla sponges, cupcakes and doughnuts.The Eco-Committee were thrilled to see the range of bakes and different tastes brought to the competition. Ms French kindly judged a winner, 2ndplace, 3rd place and certificates for everyone involved. All bakes were unique in style, taste and decoration, all contestants clearly taking care and precision with their bakes. Money was raised while selling the amazing bakes for the ‘Eco Schools’, an organisation that aids schools to becoming more environmentally friendly. Special thanks to all contestants for your delicious bakes, and we hope this has opened your mind to vegan food!

Your browser is out-of-date!

Update your browser to view this website correctly. Update my browser now